I am constantly sharing toy guides with you mamas with the new and latest toys that we have discovered or purchased. However, I don’t always follow up with an actual honest review of our thoughts about each of the items. Which I would hope is going to be super helpful for you when deciding on what toys to invest in for your littles.  Today you can find all of the Kids Toys we gave at Christmas and An Honest Review of every single one. Answering questions like, If we would buy again? Are these toys worth the money? and what toys I would pass on. Find all the answers below. 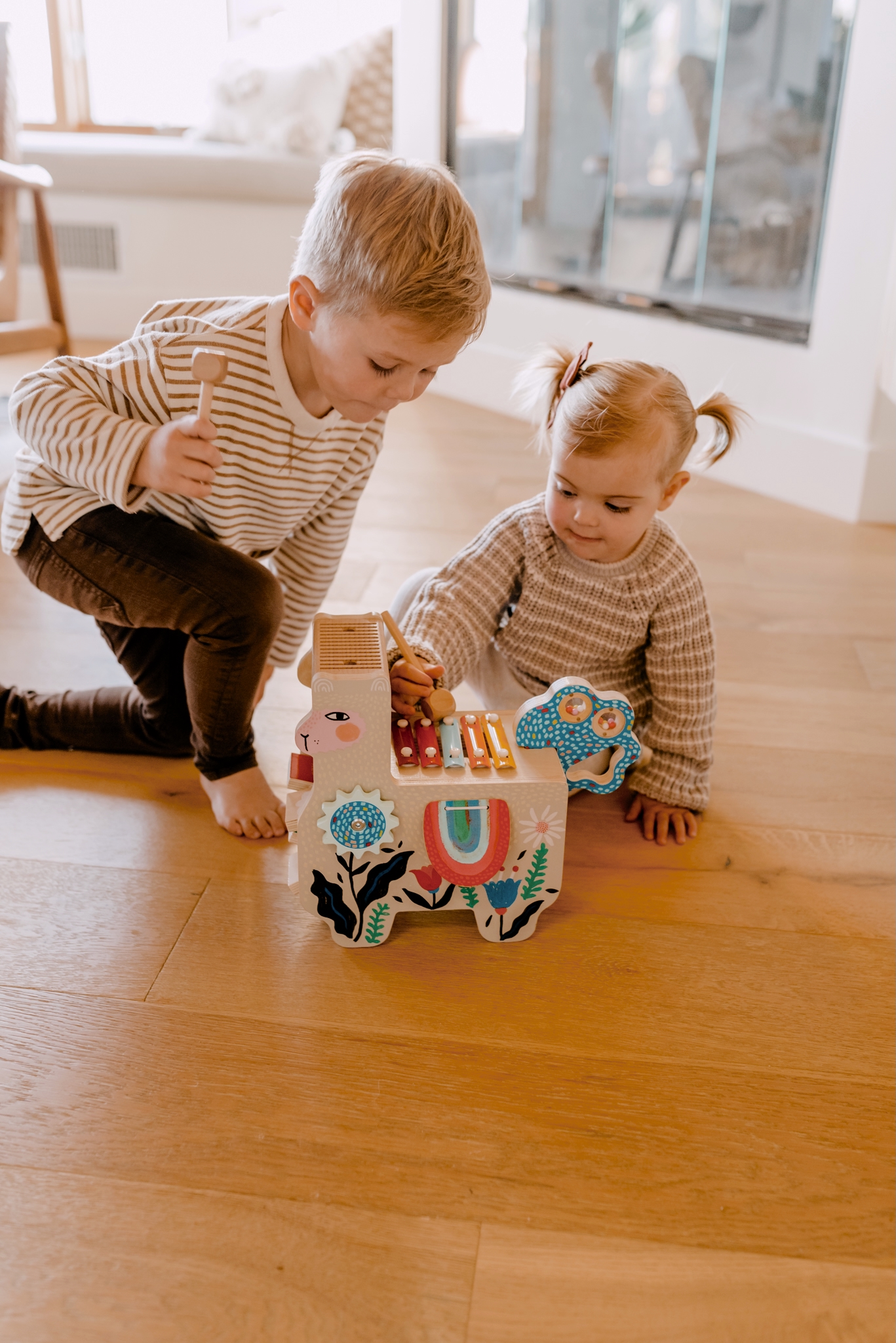 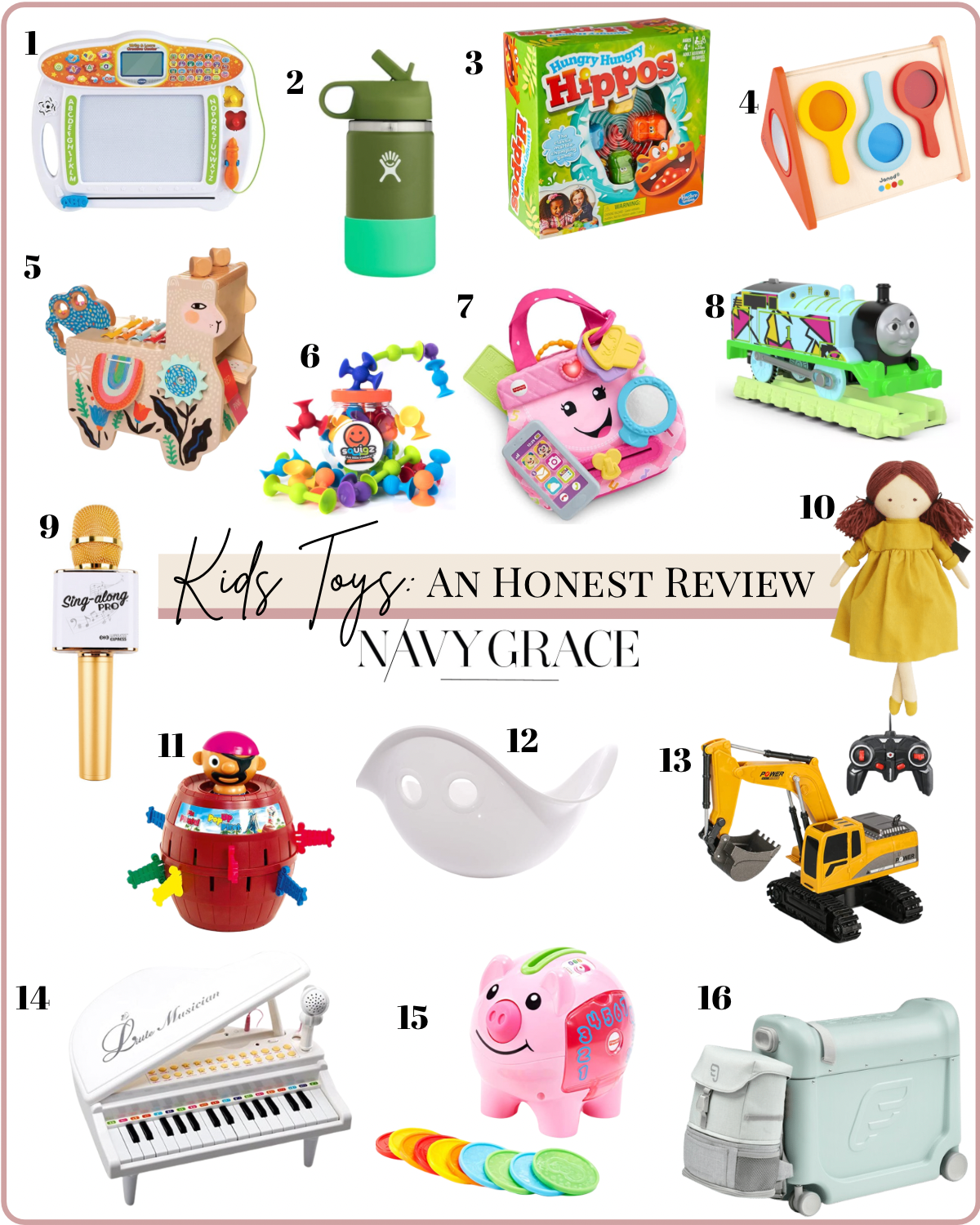 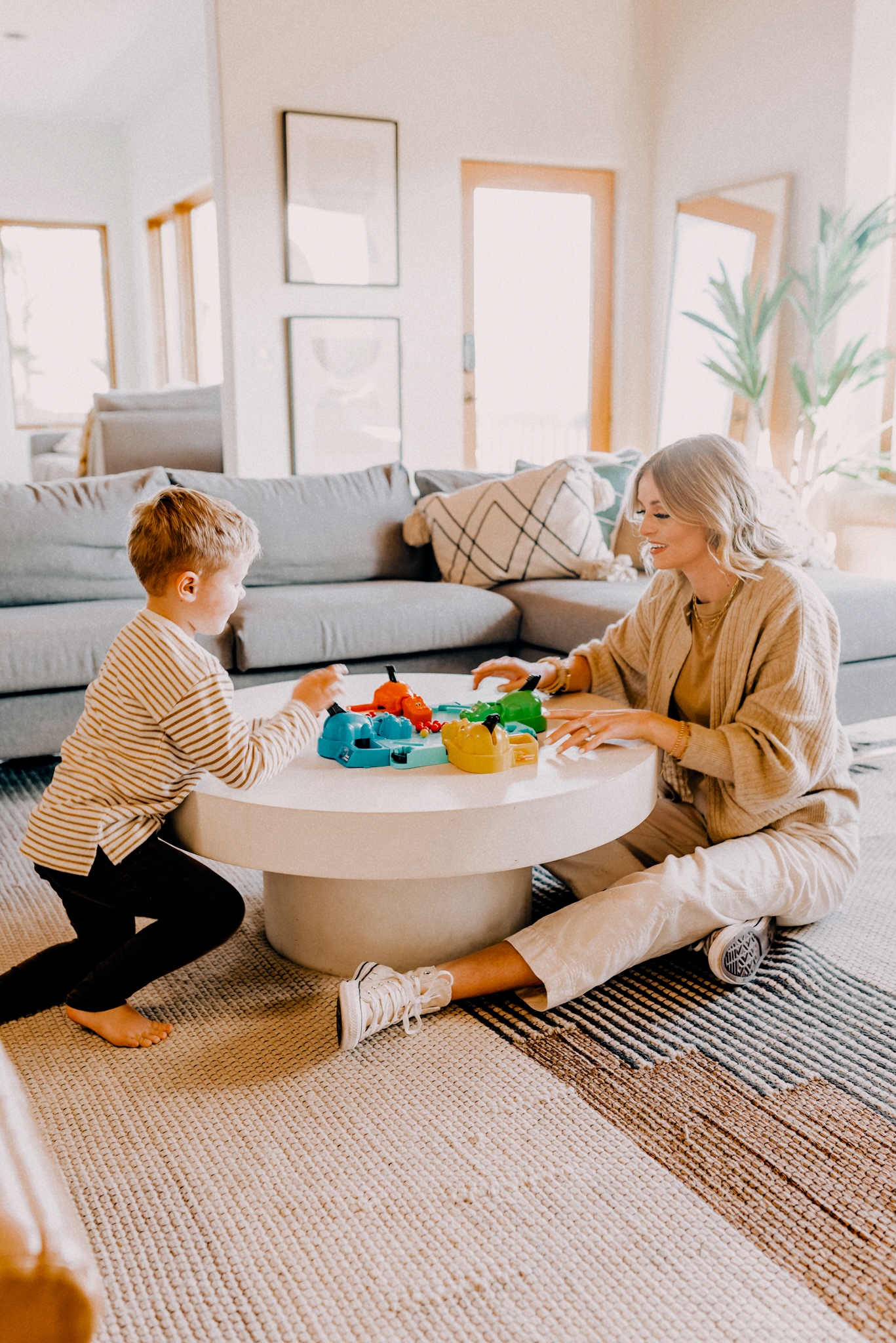 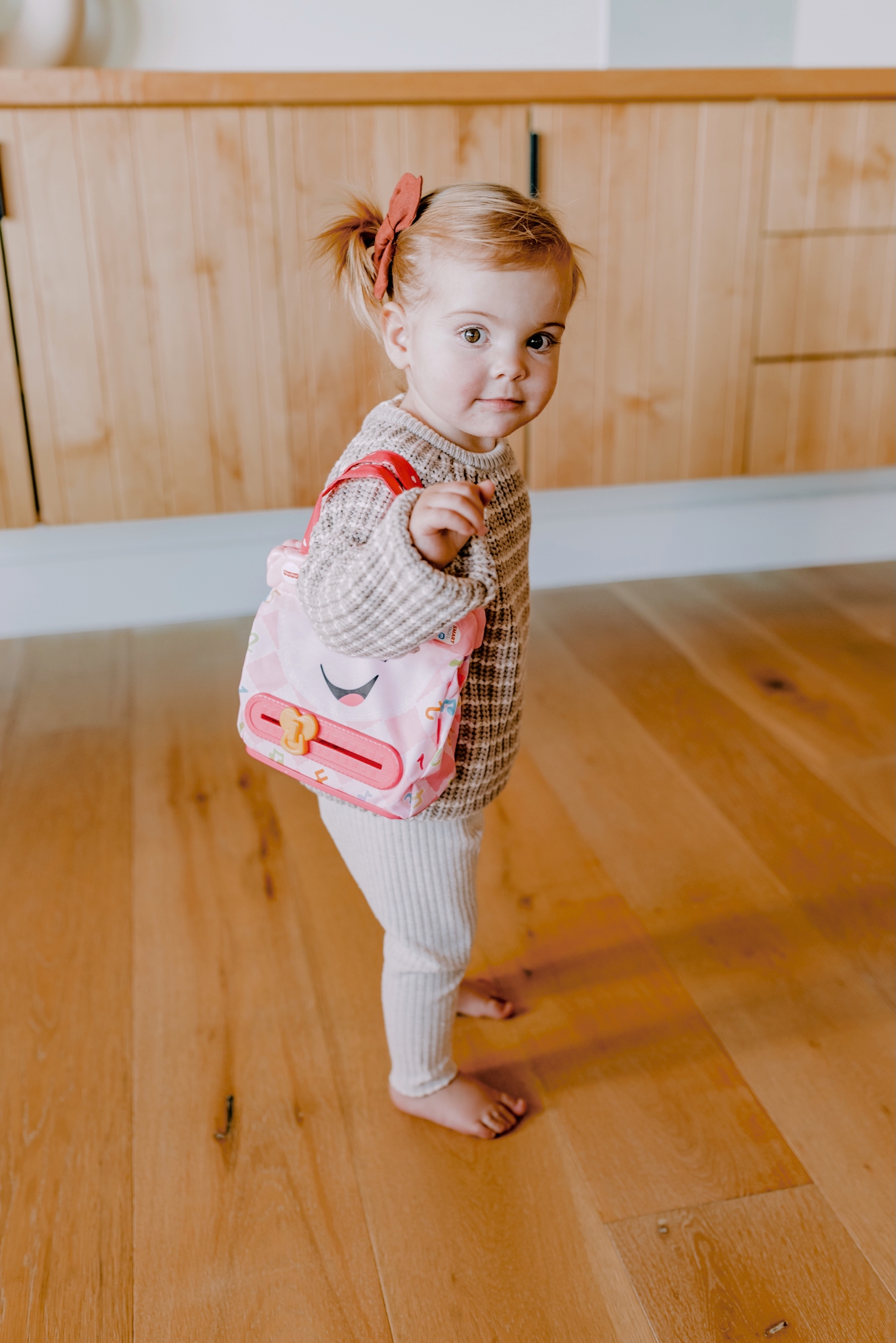 With Edison being in his first year of preschool, he has really enjoyed learning letters and numbers. We get to practice together and this is a great way for Edison practice on his own without my help. He loves playing with it and I love that it is something he can continue to use as be comes more and more comfortable with his letters and numbers.

It was time for Lucy to get her own Hydro Flask. I ended up getting both the kids new water bottles and of course from our one and only family favorite. Hydro Flask. Our entire family is hooked on this brand. I love these water bottles specific for kids with the rubber bottom to help all the dents. For sure a must for kids.

Edison has been very into fun games lately, so we got him this game and it has been so fun to play together as a family or one on one. It’s definitely been a huge hit! Any time friends come over, this is the first game Edison brings out. Only downside is you have to disassemble the game to make it fit back inside the box. It’s easy and simple to set up, but a little on the annoying side.

I first loved the overall look and design of this cute mirror box for Lucy. It has multiple types and shapes of mirrors that Lucy loves to hold, move around, and look at her reflection. Her favorite feature on the box is the detachable magnifying glass that she of course holds up to her eyes and nose 🙂 It’s a toy that is cute enough that if left out, you don’t mind one bit.

I had my eye on this cute musical llama after seeing it at our friends house earlier this year. First, it’s adorable and something I don’t hate seeing left out. Secondly, it’s so fun for Lucy who is 1.5 years old. It has multiple musical options like a xylophone, maraca and more. She loves it and is constantly pulling it out of the cabinets to play with. Even Edison enjoys it too.

Got these for both of the kids to share. Lucy loves to hear the fun pop noise they make when you pull two apart, and Edison likes to build towers with the Squigz. These would be great to keep in the diaper bag for car rides, traveling, or trips to restaurants. They are kind of expensive in my opinion, but I do feel they are still worth the money!

This was Edison’s gift to Lucy that he picked out while shopping at Target. It was so much fun to have his help deciding between a few gifts for her. And I will say, he did so good because this is one of Lucy’s favorite things right now. She loves to take out all the accessories from the purse, which include a phone, bracelet, credit cards and more. There is no doubt about it that Lucy is a girly girl, she knows exactly how to put the purse on her shoulder, and the bracelets on her wrist.

The one toy Edison kept begging for Santa to bring him. He used to have a hyperglow train and of course we lost it several months ago and after cleaning out every toy drawer and cabinet we could not find his favorite train. Which was why it was on the santa wish list. If your kids are into Thomas the train, this is such a fun way to mix things up. These specific trains have a light feature that glows the glow in the dark tracks up. Another huge feature that we love is they will shut off if they are kept running for too long. Any parent of a child who owns Thomas and Friends trains knows just how many batteries you go through haha

This has been a huge hit for everyone. Especially Edison, note the photos 🙂 I do try to tell him we don’t “eat” the microphone though haha We love the bluetooth feature which allows you to play music from your phone and have a real karaoke effect. It’s so much fun. I would recommend getting two if you have more than one kid that way there are not fights and just more fun having two singing their favorite tunes.

Ahh! my favorite gift I gave Lucy. I had been holding on to this doll for several months and have been just dying to give it to her. Her reaction on Christmas morning seeing it as a gift from Santa was priceless. She instantly gave her doll several hugs and packed it around the house. She still loves the doll, and loves to take naps with it. I am always hunting for cute dolls that aren’t super tacky, this one is easily that. Worth it, I would love to grow her collection with the same dolls.

I got this game because it had so many reviews on Amazon. However, I wasn’t impressed. The design was a bit off. It needs either a suction cup or a heavier base. We had to hold the barrel anytime we pulled out or pushed in the pirate swords, and any time it was Edison’s turn he would end up holding the pirate to pull out a sword which affected the suspense of the pirate popping out. Overall I would not recommend buying this game.

These are so much fun and such hit. I got one for each of the kids so they each have one. Brandon called them “a giant salad bowl” but they are so much more than that! You can take them in the snow, use as seats to sit and spin in, turn over to stand on or use as a stepping stool, or fun toy in the pool. We have even used them as a tunnel for all of Edison’s train tracks. Another great feature is that they can stack together which helps so they don’t take up as much room.

Edison has had this idea of getting a remote control excavator for several months and this was one of the two items he had on his Christmas list. Once we told me the idea, I had the idea to use the excavator as an encouragement to become potty trained at night. One evening during our nightly story telling time, I told him that the little elves were keeping a close eye on his as he was sleeping and if he could become potty trained by Christmas they would report back to Santa and he would bring this toy on Christmas day. He was so pumped by this and worked so hard at being night potty trained. It was a well deserved toy!

If you haven’t noticed yet, we had a very musical themed Christmas this year. I couldn’t go without including a small piano for the kids. This gift was specifically for Lucy, however both kids have really enjoyed it. It has a microphone which is clearly a favorite feature for Karaoke. I love that the kids can play for fun, press the record button and hear what they just played with the record & play feature. There are also several other musical instruments and rhythms that can be played by the push of a button. Lastly a red light appears with every touch on the piano keys which Lucy loves. My only regret is not ordering the wooden piano instead of the the plastic one since we have been leaving this toy out.

This is easily Lucy’s favorite gift this year. I am not one who loves a lot of pink toys, I find they look cheap and tacky. However, this piggy bank is absolutely adorable, and offers so much activity. It plays songs, talks, and also has the option to be muted. Worth buying again, and it’s under $20!

If you watched us during our travels this holiday season, then you would have seen a few IG stories where I shared Edison riding on the JetKids travel suit case. This was easily the coolest way to travel. We got so many compliments and people asking where we got Edison’s suitcase. The fun and unique design allows for your child to sit and be pulled in the airport, or like Edison did, sit and ride around completely directing it himself. It doesn’t just stop there. The luggage is specifically designed with an airplane in mind allowing it to fit perfecting under the kids feet for easy access to toys and treats. This luggage easily made our travel experience a breeze!

Shop all these Kids Toys Here 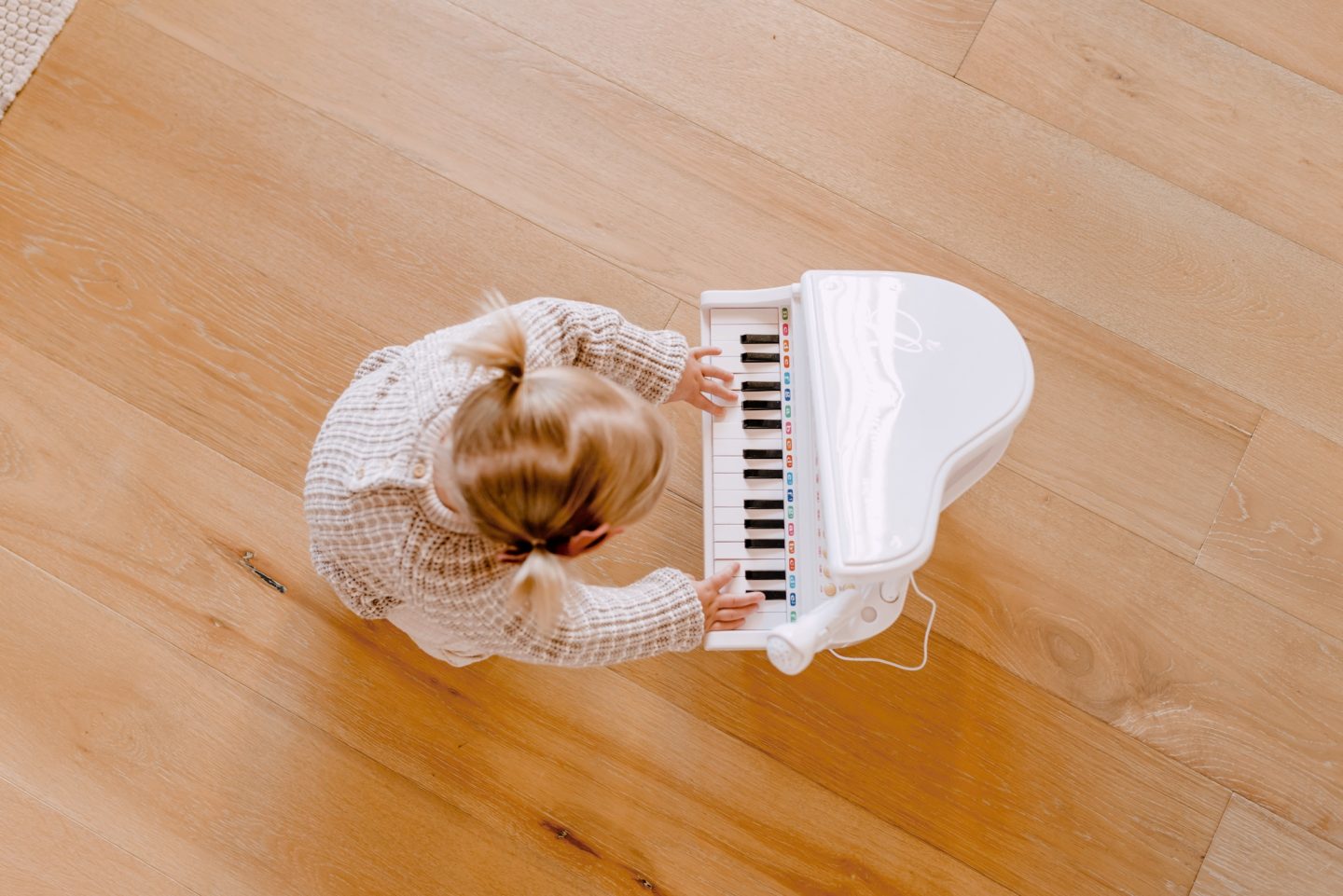 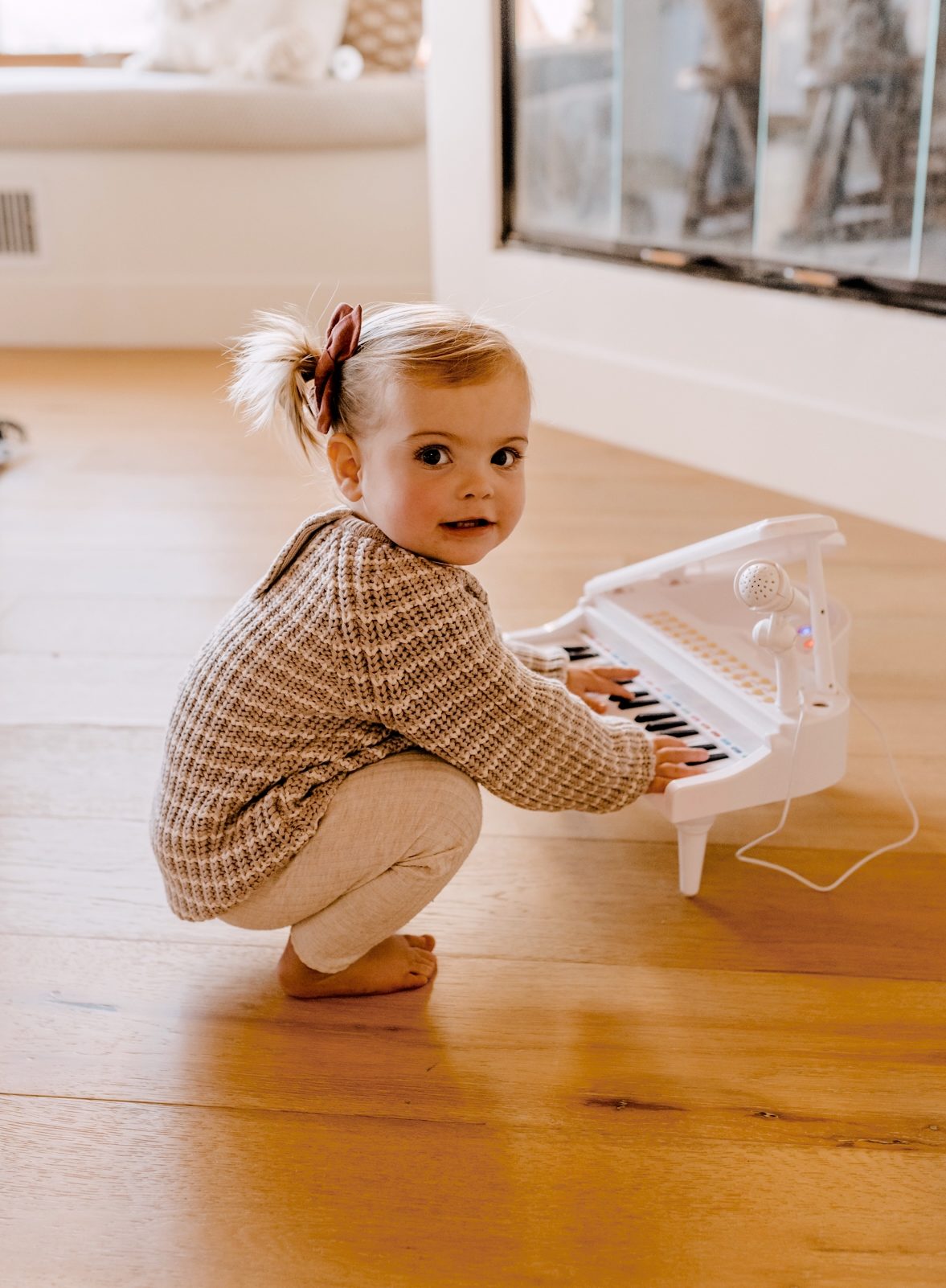 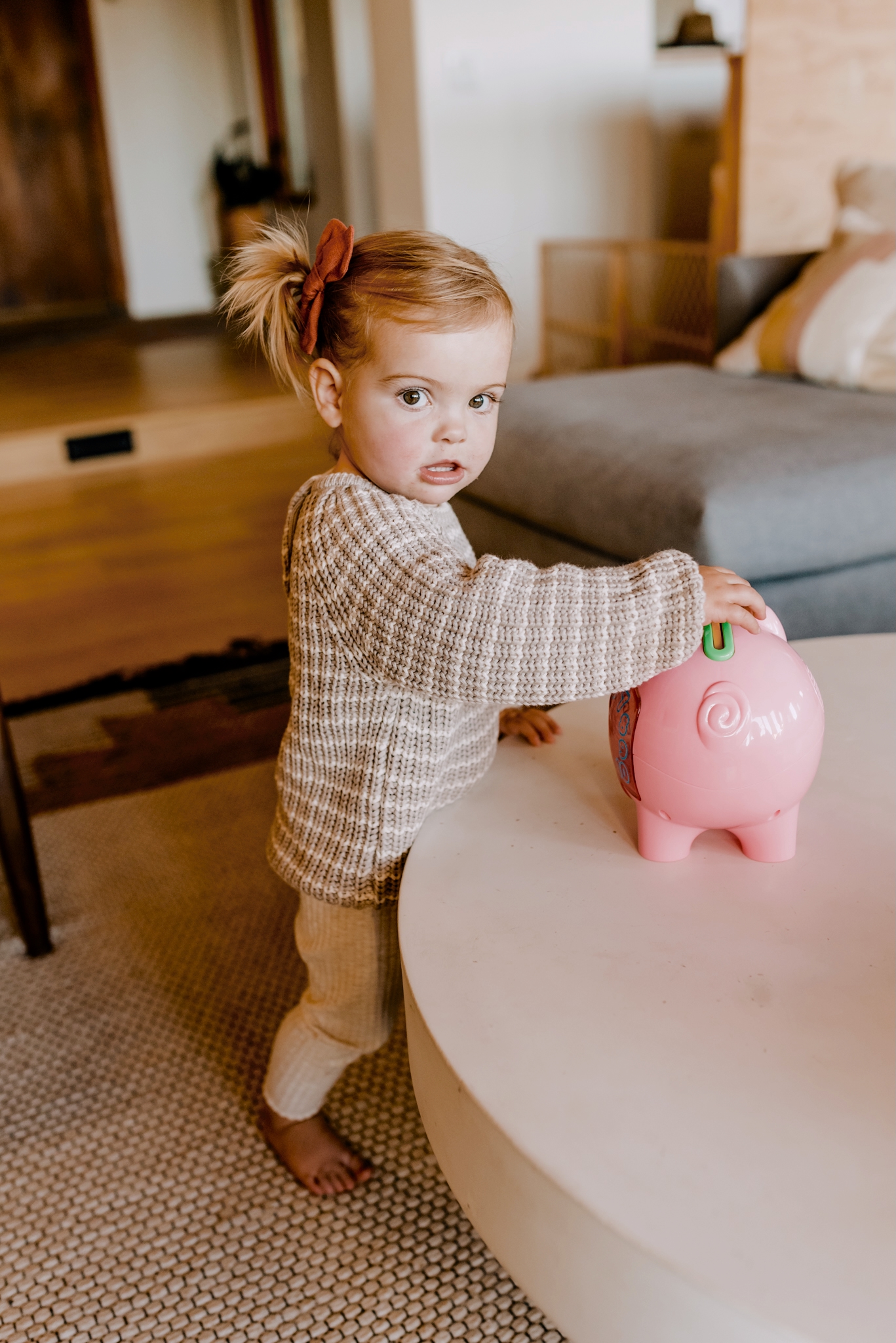 Shop all these Kids Toys Here 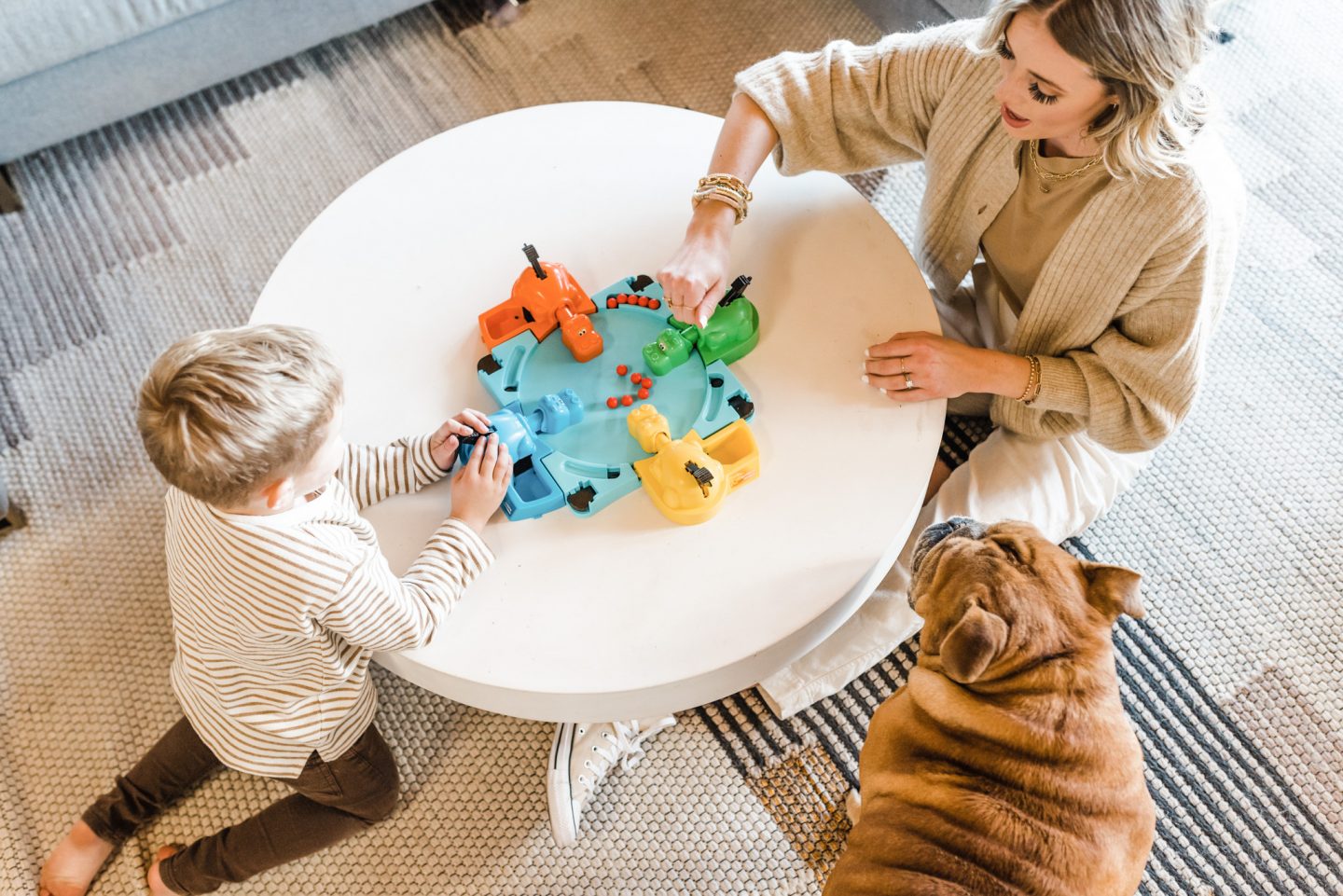 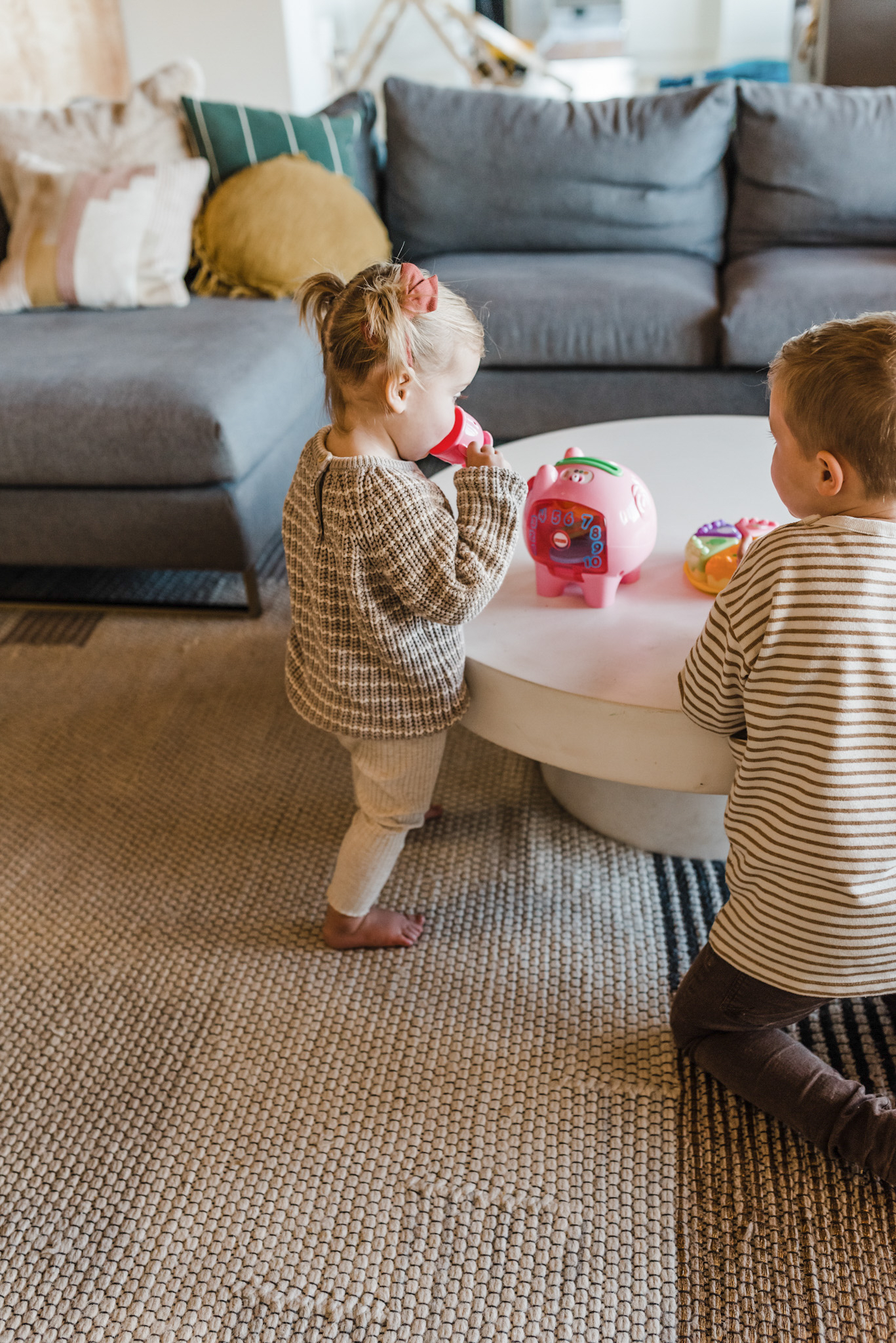