One of my favorite parts about living in Southern California is that we get to visit Disneyland, and often too! I mentioned to Brandon the other day, that I love that our kids get the opportunity to grow up going to Disneyland. We can raise our children doing something that both Brandon and I found a love for when we were first married. Today I am sharing about our recent visit to Disneyland and why it happens to be our favorite visit yet plus I’m sharing our 10 Best Disneyland Tips.

Since we live in San Diego, we have had Disneyland passes every year we have lived here. We are only 1 hour and 15 minutes to the park, so it just makes sense for us to always be pass holders. This last month we had the opportunity to attend Disneyland as part of the Spring Media Influencer group. We got to see the park from different eyes, and made us fall more in love with the Disney Magic. This particular weekend spent in Disneyland is easily in our top 3 favorite Disneyland visits to date! For many reasons, but I think this experience tops the charts because we were able to cross off a lot of firsts on our Disney bucket list. 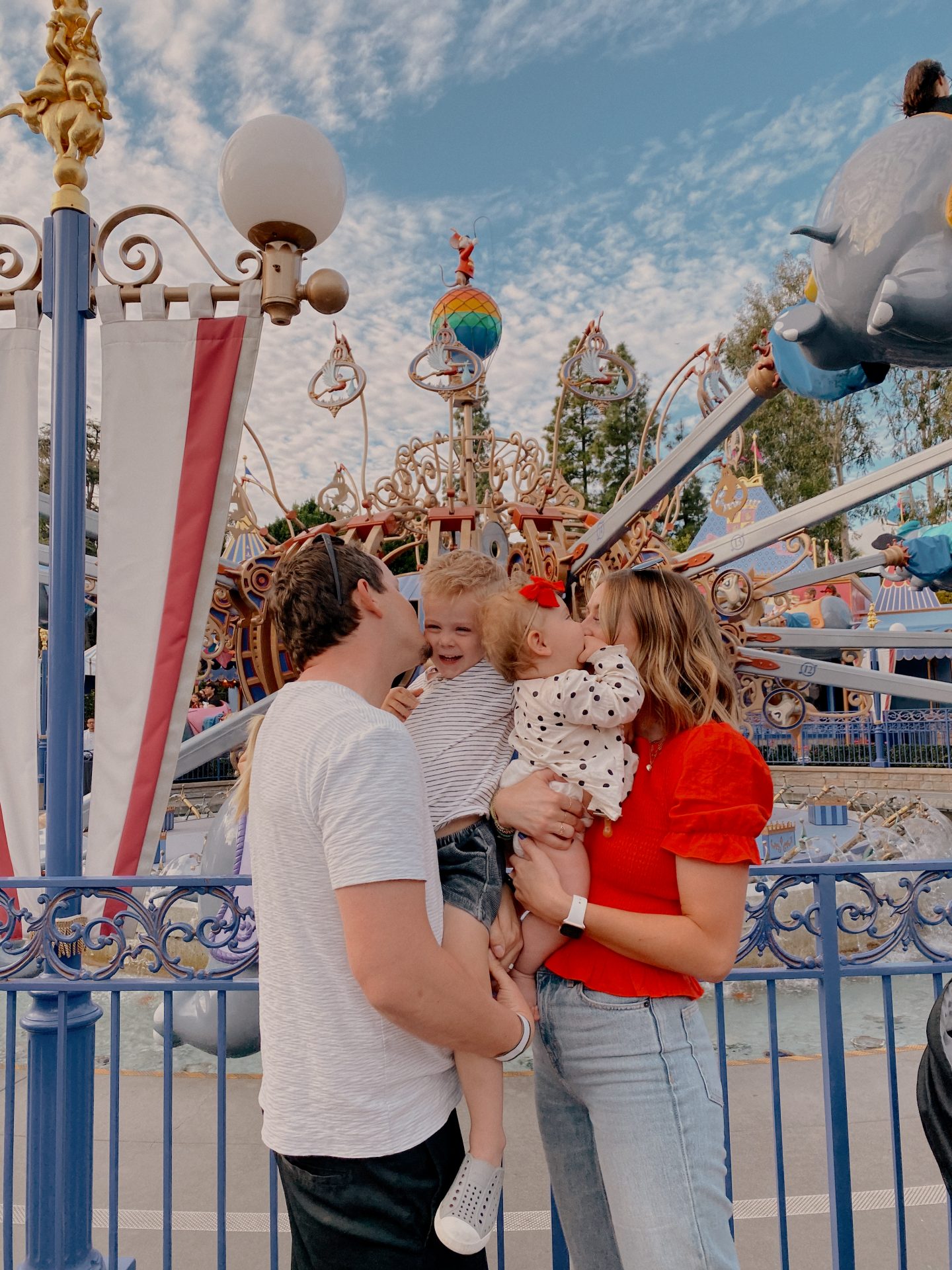 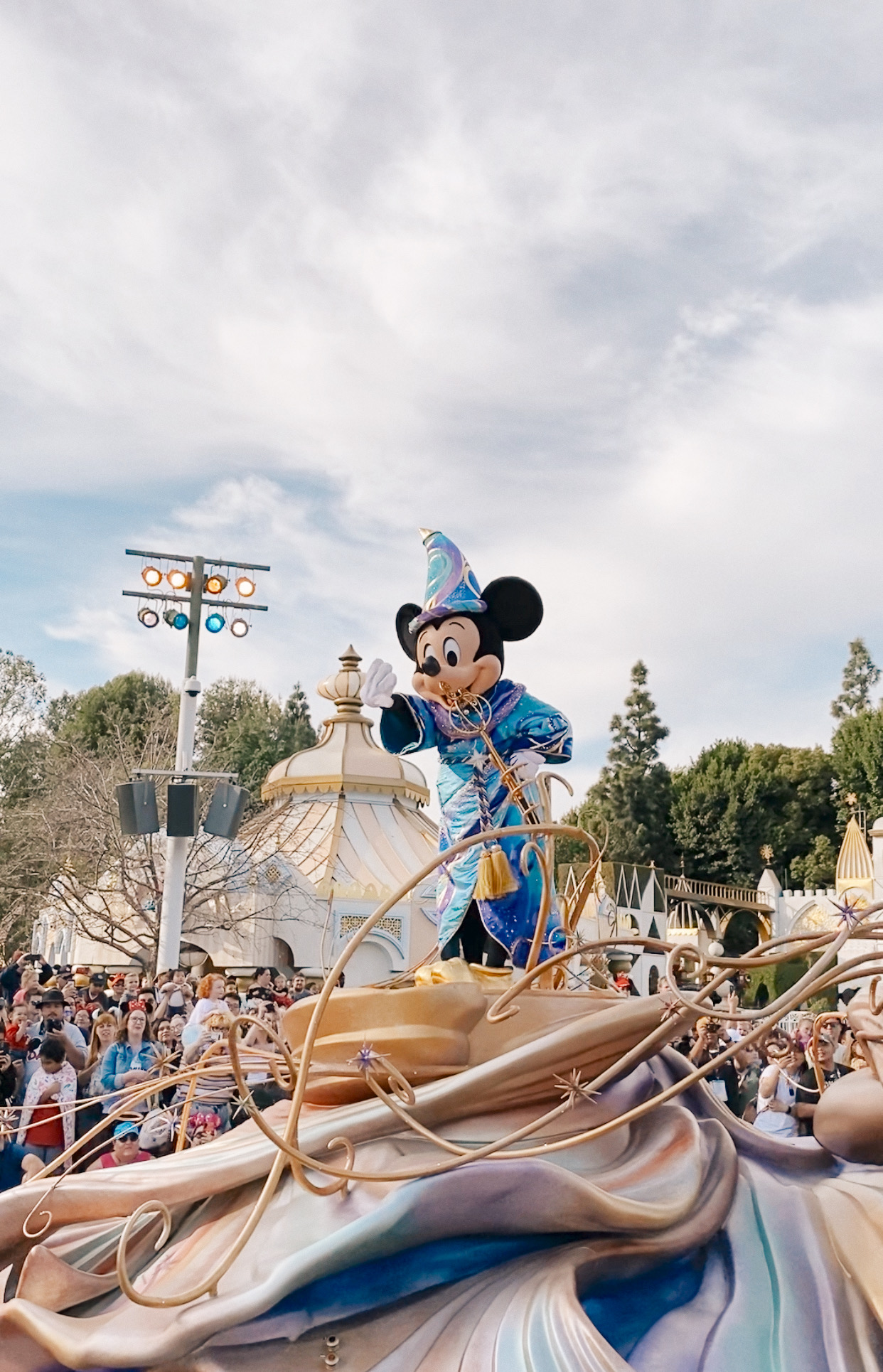 Continue below to see our 10 Best Disneyland Tips

While in the park we had the amazing opportunity to watch the newest Magic Happens parade. This parade is truly magical!

Have you ever watched a Disney parade? We’ve actually only watched a few throughout the years, but I don’t know if we have ever watched an entire parade from beginning to end. You won’t typically find us sitting for an hour before the parade starts to hold a viewing spot. I think that is why we have never stopped to watch a full parade, we don’t want to waste a minute. However after watching the Magic Happens parade, our eyes have been open. The enthusiasm and excitement that happens during the parade is so fun. I was getting emotional watching Edison light up when he would notice a character from a Disney Movie he loves. Watching him get so excited about seeing Coco and Elsa made me tear up! Him waving proudly while grinning is something I don’t want to forget.

Since we live so close to Disneyland we don’t normally book a hotel inside the park, or even outside the park for that matter. We generally just make the long journey home. But ever since we stayed at the Grand Californian Hotel and Spa during our last visit we were amazed at how convenient and fun it was to stay right inside the park. You can count on us to book again! The Grand Californian Hotel has an entrance that enters right inside California Adventure Park and Downtown Disney. It cuts your walking time down and allows you to run back to the hotel in the afternoon to relax, let the kids nap, or take a break at the fun pools. 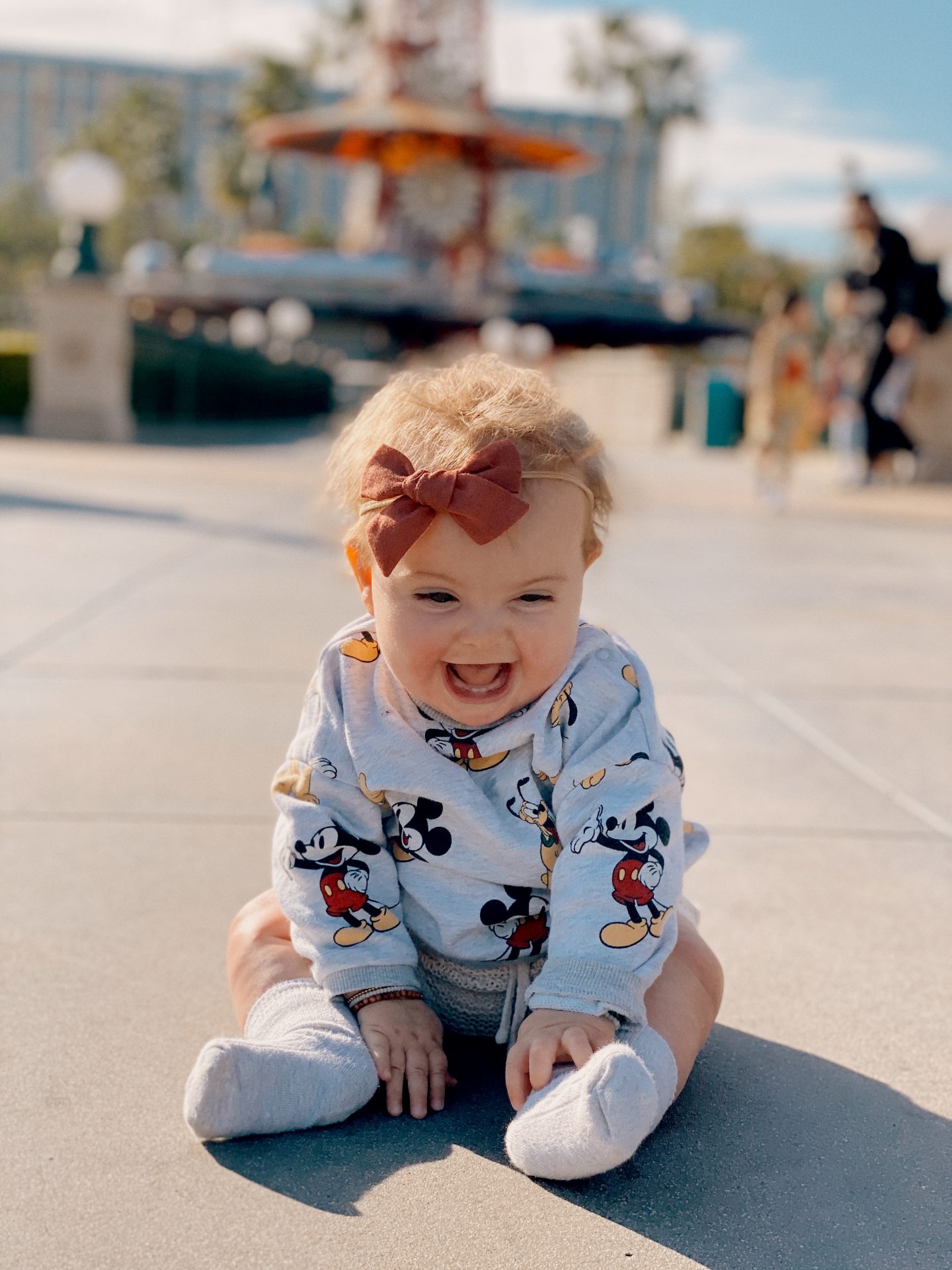 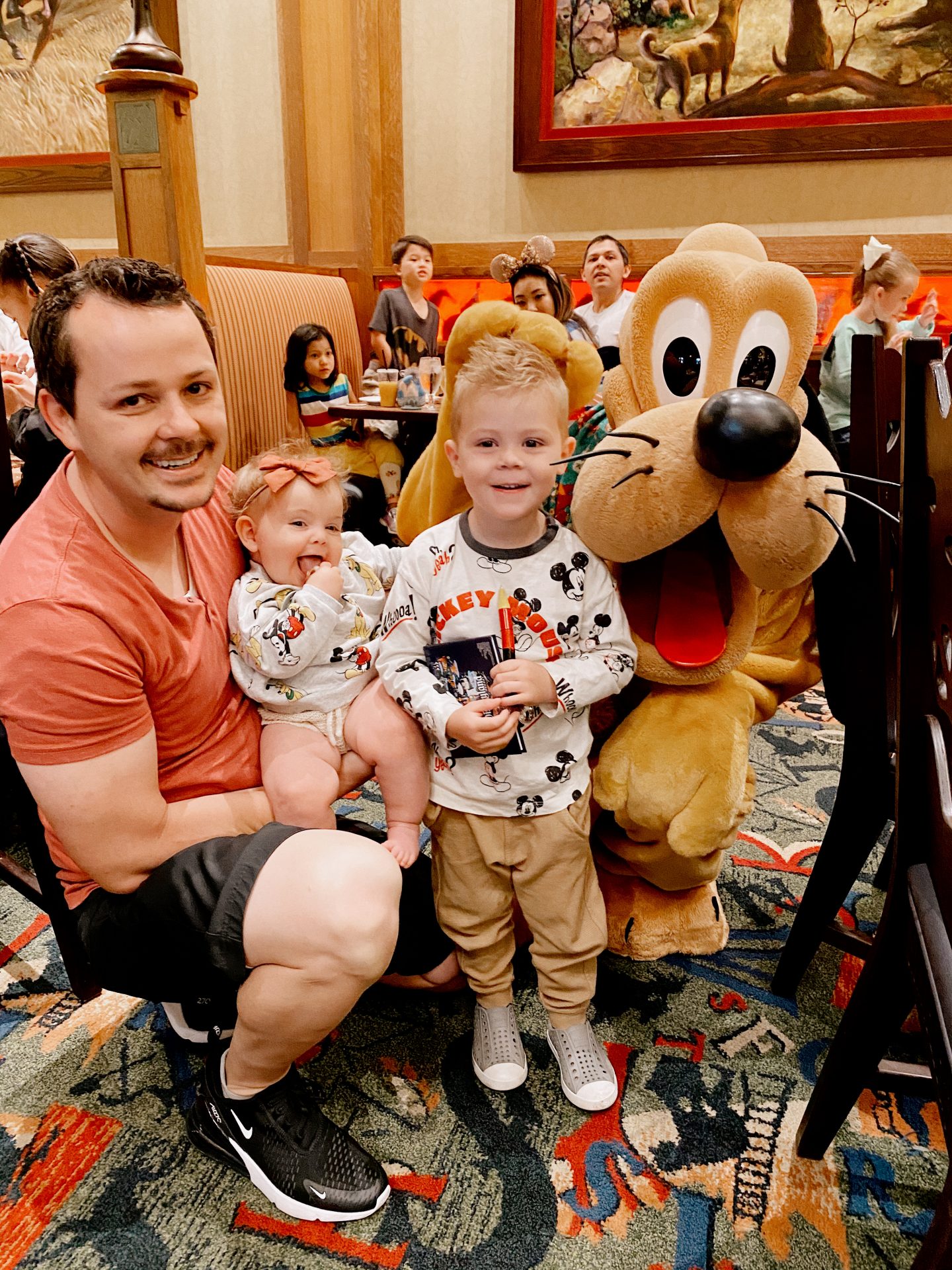 We start using the Disneyland Mobile App the second we walk into the park! Make sure to have an idea of what rides and attractions you hope to ride that day. You may not get to all of them, so having a game plan is key. Use the app to map out what area you want to start out at. We love using the App to see the updated wait times for both Disneyland and California Adventure Land. That truly determines what ride we will catch next. Also, make sure you put everyones Day Pass in the Mobil App so you can access the MaxPass if you add that on to your purchase.

It’s an additional fee per ticket, or a one time fee if you have a season pass. We decided it would be worth the extra money, and it sure has been! Once you enter the park you are allowed to make FastPass reservations through the Mobile App. Choose a ride that normally has a long wait line, like Cars Land, Star Wars, Thunder Mountain Railroad,  Space Mountain just to name a few. Normally you have to be at the rides entrance at their machines to get a FastPass, but having the Maxpass allows you to choose a ride through the App. Make sure that once you complete the ride you had as a FastPass, quickly search and get a new time for a new ride.

This was our first experience with a Character Breakfast, but I absolutely loved it so much! I know we will do it again and again. It was so special, and such a fun way to see your kids react an appreciate the characters since they are able to spend more than a few minutes with them. We did our Character Breakfast inside the Storyteller Cafe at the Grand Californian Hotel. However, I know there are several other places that hold a Character Breakfast.

Every Disney character that you and your kids get to meet, pull out your pen and notebook and ask for their own special autograph. This is such a keepsake item, and something your kids will appreciate looking through after heading home or anytime they miss Disneyland. I made sure to keep this notebook separate (or hidden) from the rest, so that we can fill it up with only our favorite Disney characters instead of Edison’s scribbles.

I know that you need to stick to a budget when coming to Disneyland, but I do highly encourage you to stay at least one or two nights at one of the Disneyland Hotels. If you are staying 4+ nights, book them the last two days. You will appreciate the convenience that the hotels have. When you are tired or exhausted you will thank yourself later!!

Brandon and I use this ALL the time! Especially on more of the grown up rides that Edison or Lucy can’t quite ride yet. We love being able cut the wait time significantly in half by riding the ride alone. Of course, you don’t get to enjoy the ride with your significant other, friend or other family member. But it’s just one more ride that you got in that day!

We use this often! Especially since some rides Lucy can’t go on yet, and other times when one of the kids is sleeping. Rider swap allows you or your group to go on a ride while the person stays back with the kids. Who ever goes on the ride first needs to let a Disney Cast member know that part of your group is waiting and that you would like to do the Rider Swap. Once you ride the ride, let a cast member know that your group just rode while you waited back with a child. They will show you were you can go to wait to get on the ride quicker.

8// Take Advantage of the PhotoPass

If you purchased the MaxPass, you will automatically have access to the PhotoPass! We use this often. Anywhere you see a professional Disney Cast Member taking photos, jump in the short line. Every photo they take will show up inside your Mobile App. It’s better than having to ask a total stranger to take your family photo.

So important! Especially your young toddlers who aren’t totally aware of their surroundings or the ones who like to run off. I have seen several people do different things, but writing your contact info on your kids arm with a simple marker or pen is enough. For older kids and teens, set a meeting place inside the park if someone gets lost.

Kids have meltdowns, your pictures won’t turn out perfectly, your kids might not be excited about meeting a character, the list can go on and on! But as long as YOU don’t set high expectation on yourself, your spouse and your kids you will have the best day ever! I promise, go into the day or days with a open heart and happy mind. Forgive and forget! Just have fun!! 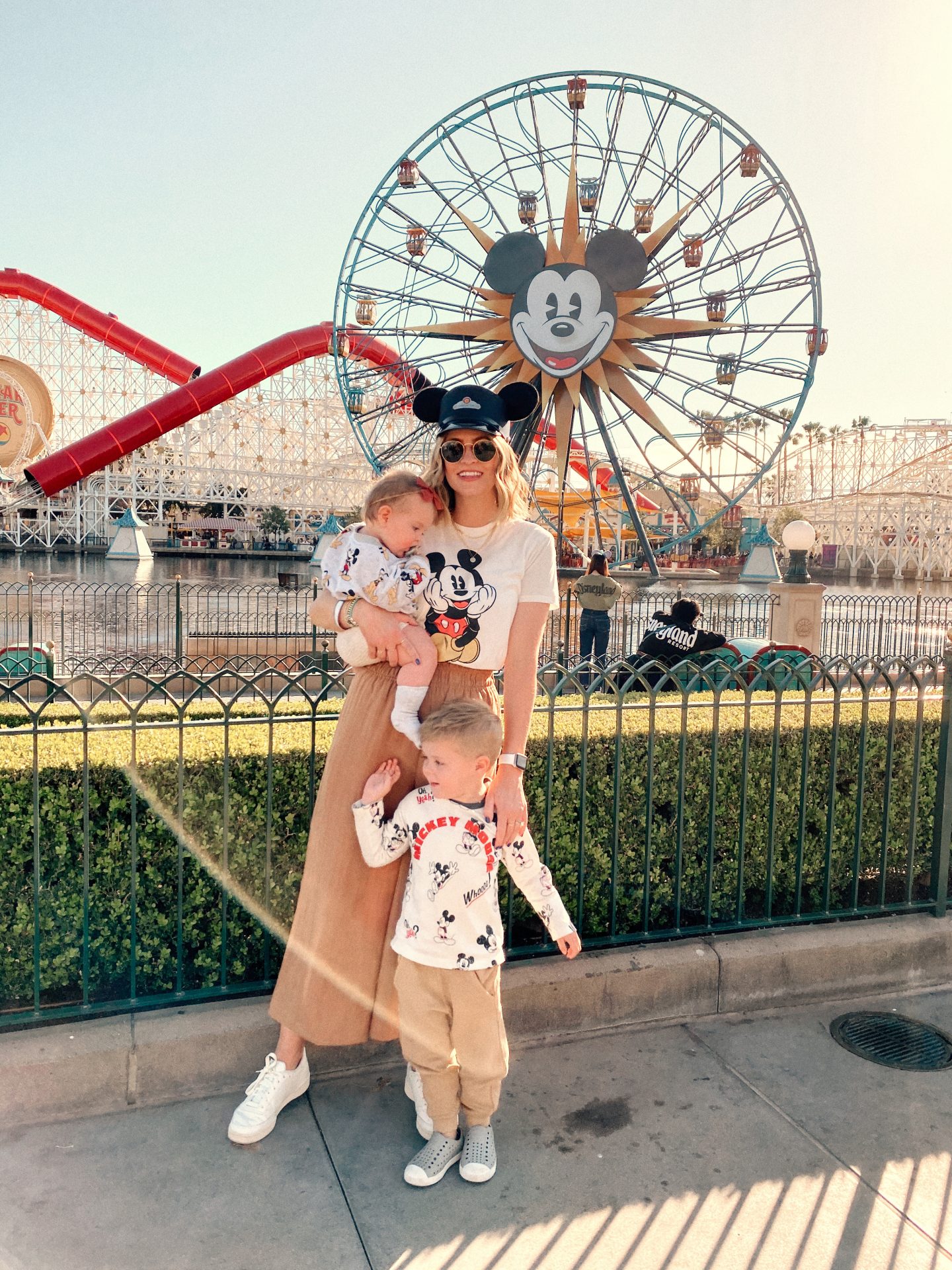 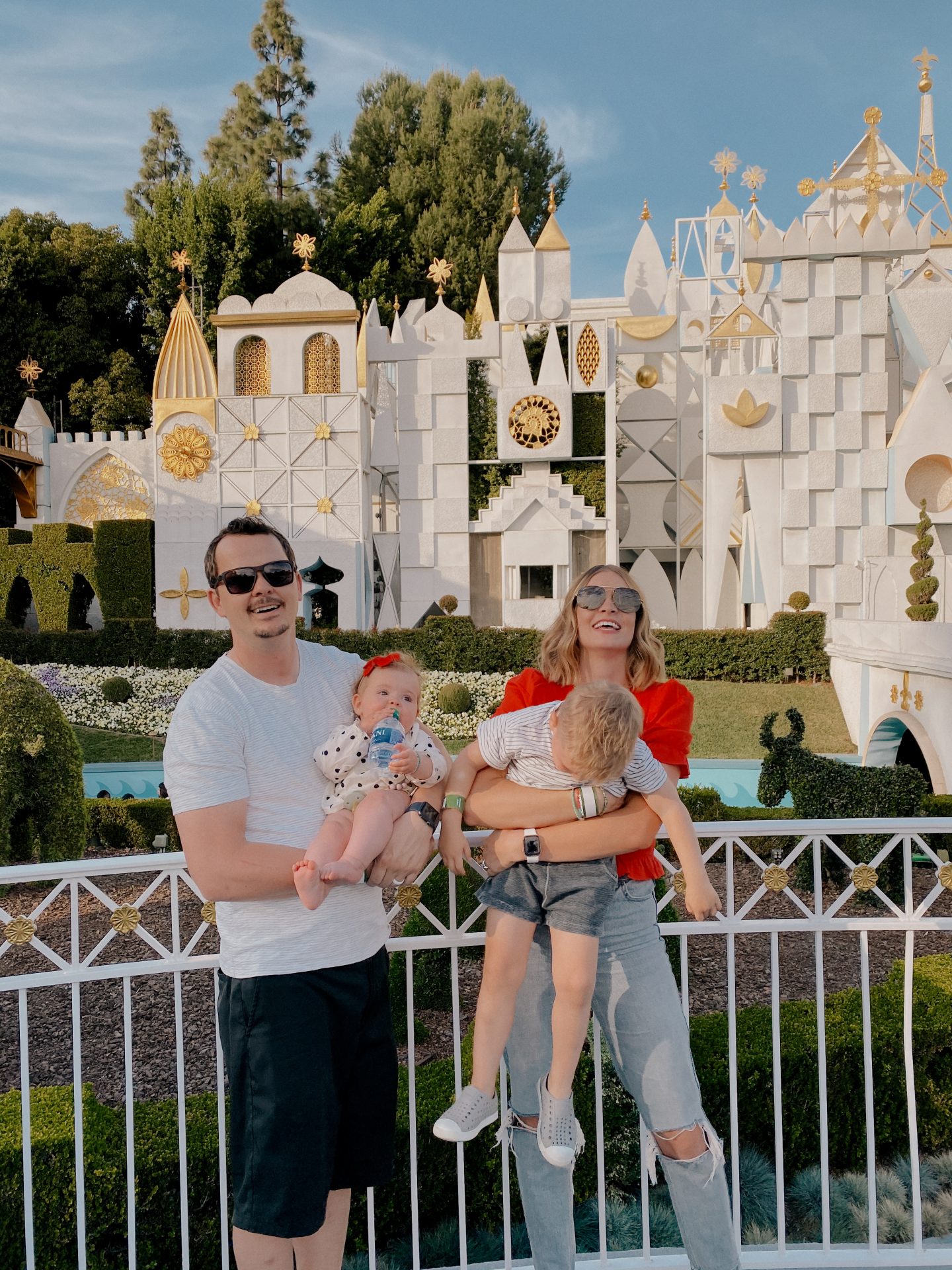 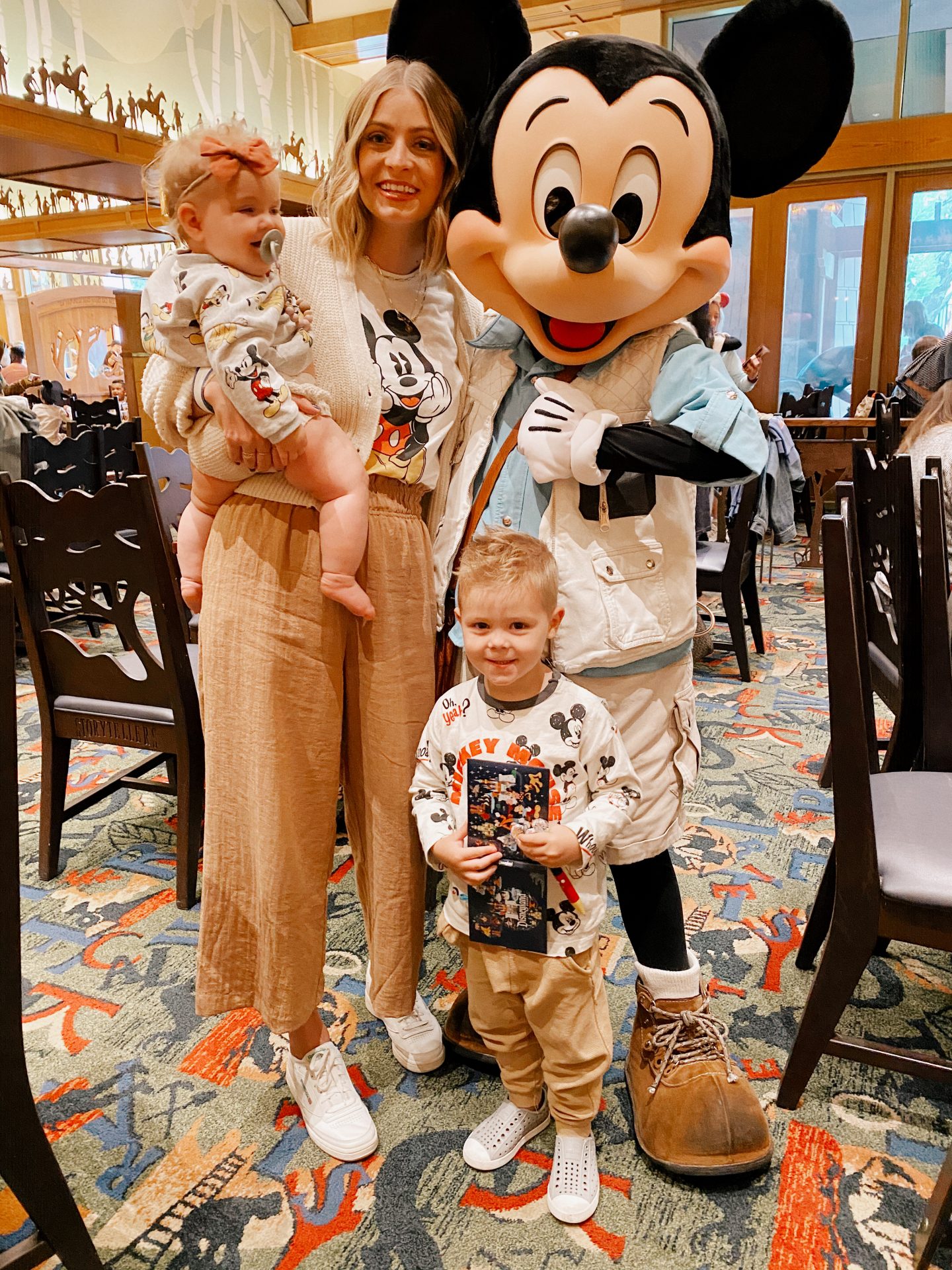 Have you ever attended a Character Breakfast before? If not, DO IT!!
It’s the cutest, and funnest thing to do with your kids. I know we will be up for doing it again once Lucy is a little older! Being able to be in the same room with so many Disney Characters and having them come up and spend some one on one time with you and your family is something so special! The constant smile on Edison’s face left us all feeling so happy and inspired. This was the first time that Edison had met Mickey Mouse. Can you believe that! He was the character he was most excited to meet, and if I am being honest, I was too! He sat and waited during breakfast, so patiently. After Mickey came around to our table, Edison walked right up to him and gave him the biggest hug. Which is what I had expected him to do. What I didn’t expect was him to give the longest hug. He gave Mickey the longest, sweetest hug! Made my mama heart so proud. After his hug he brought out his notebook and pen to get Mickey’s signature. Next up was Pluto and he was just as thrilled. Gave him the longest hug as well and asked for a signature! 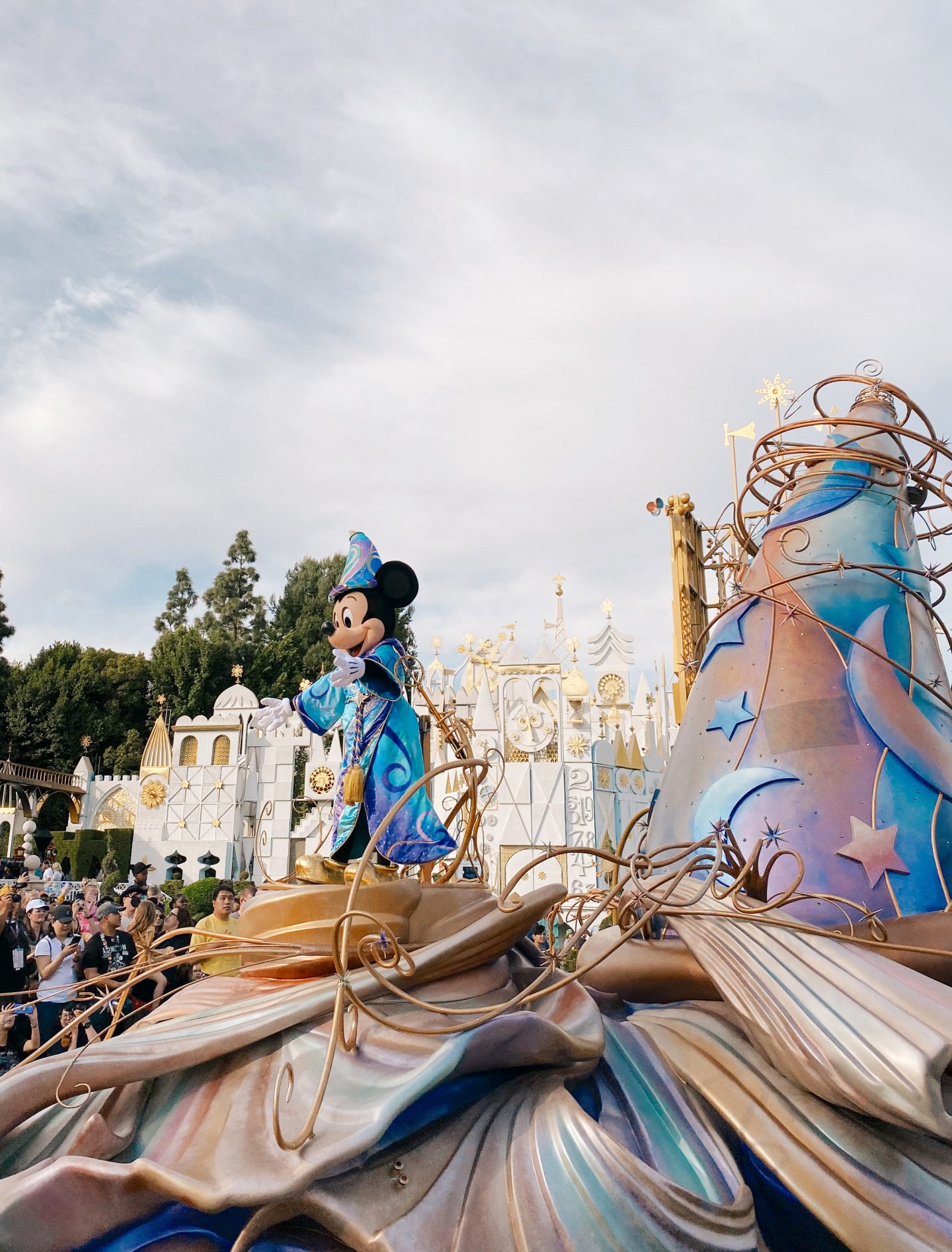 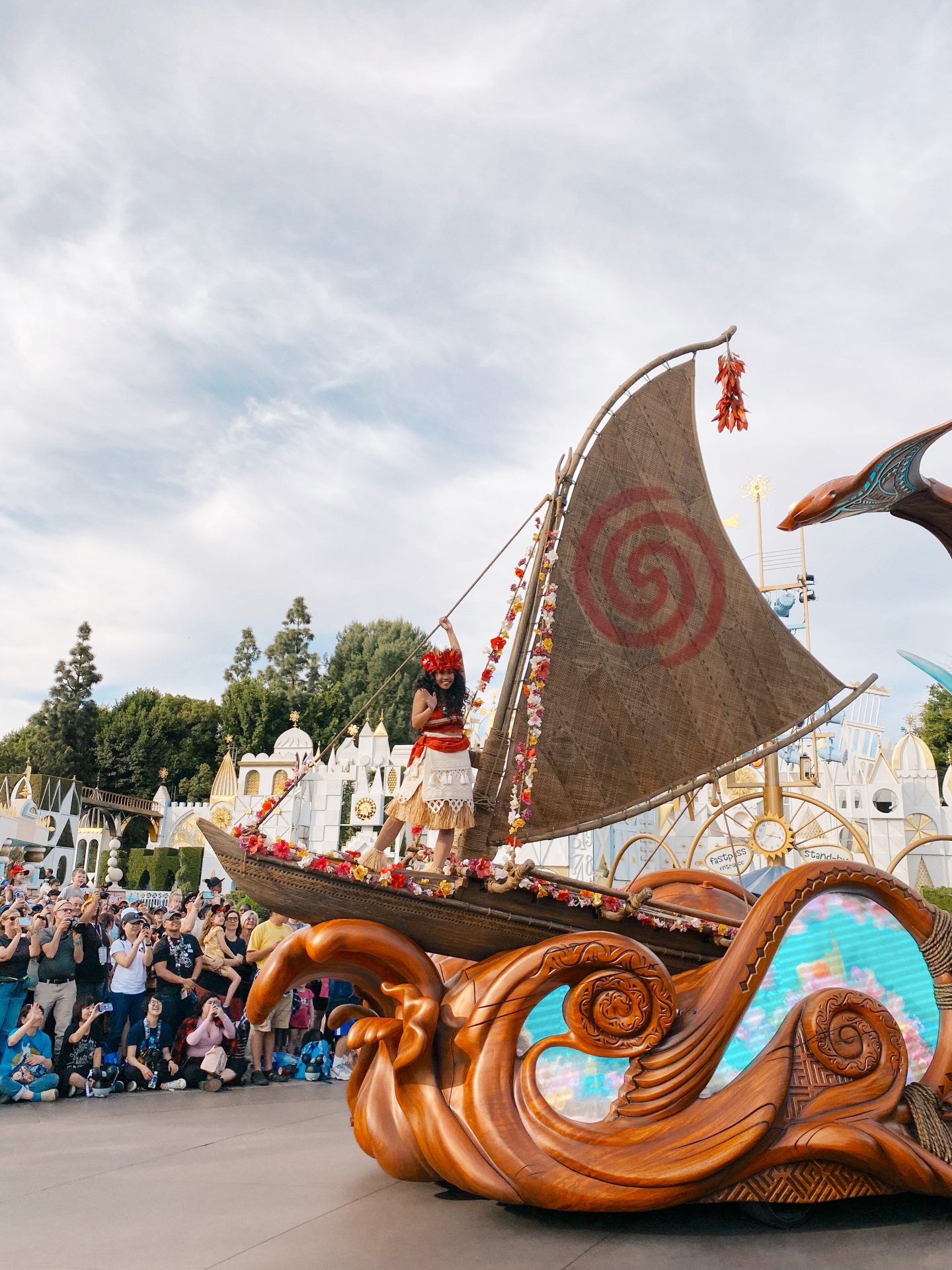 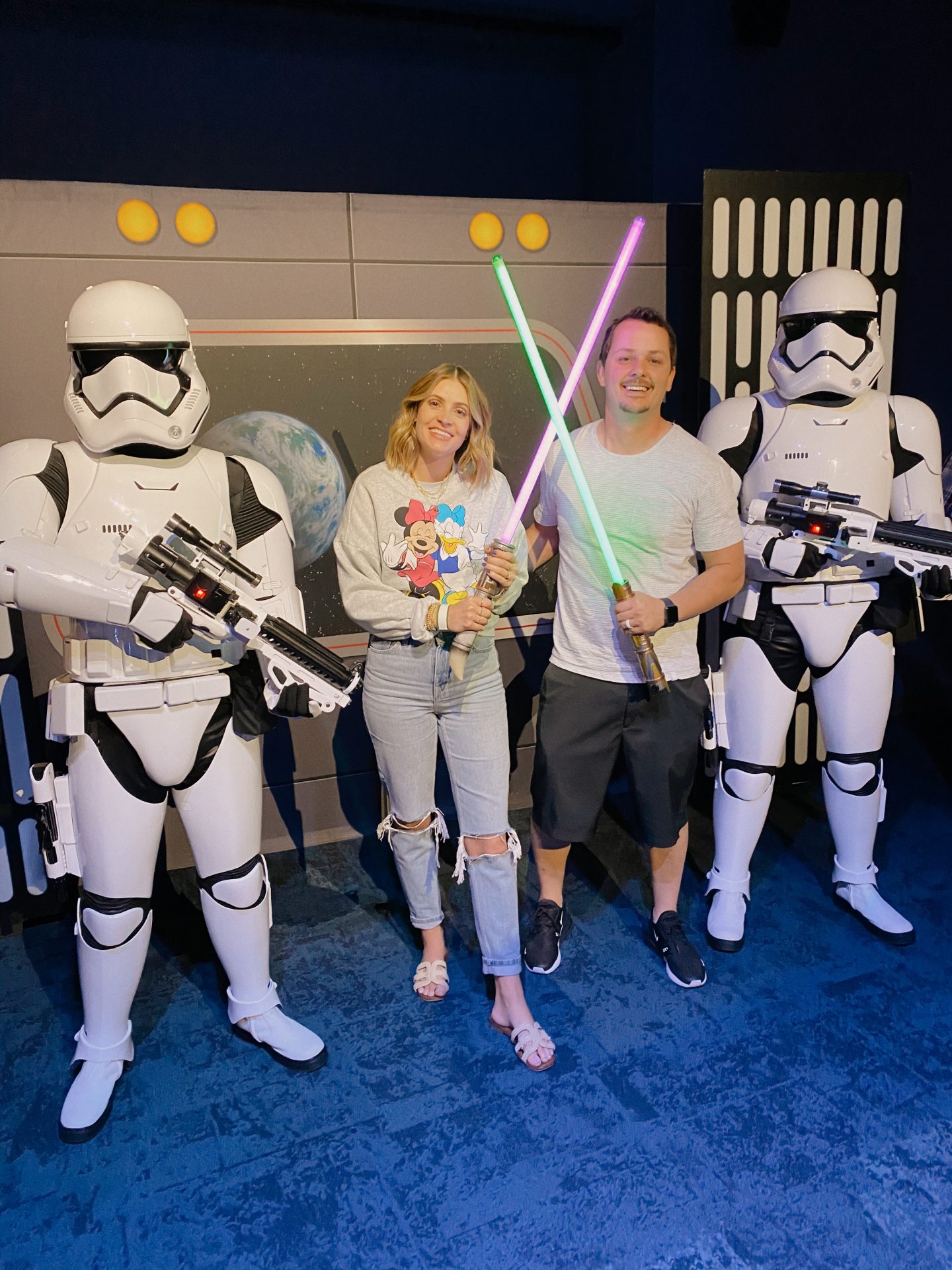 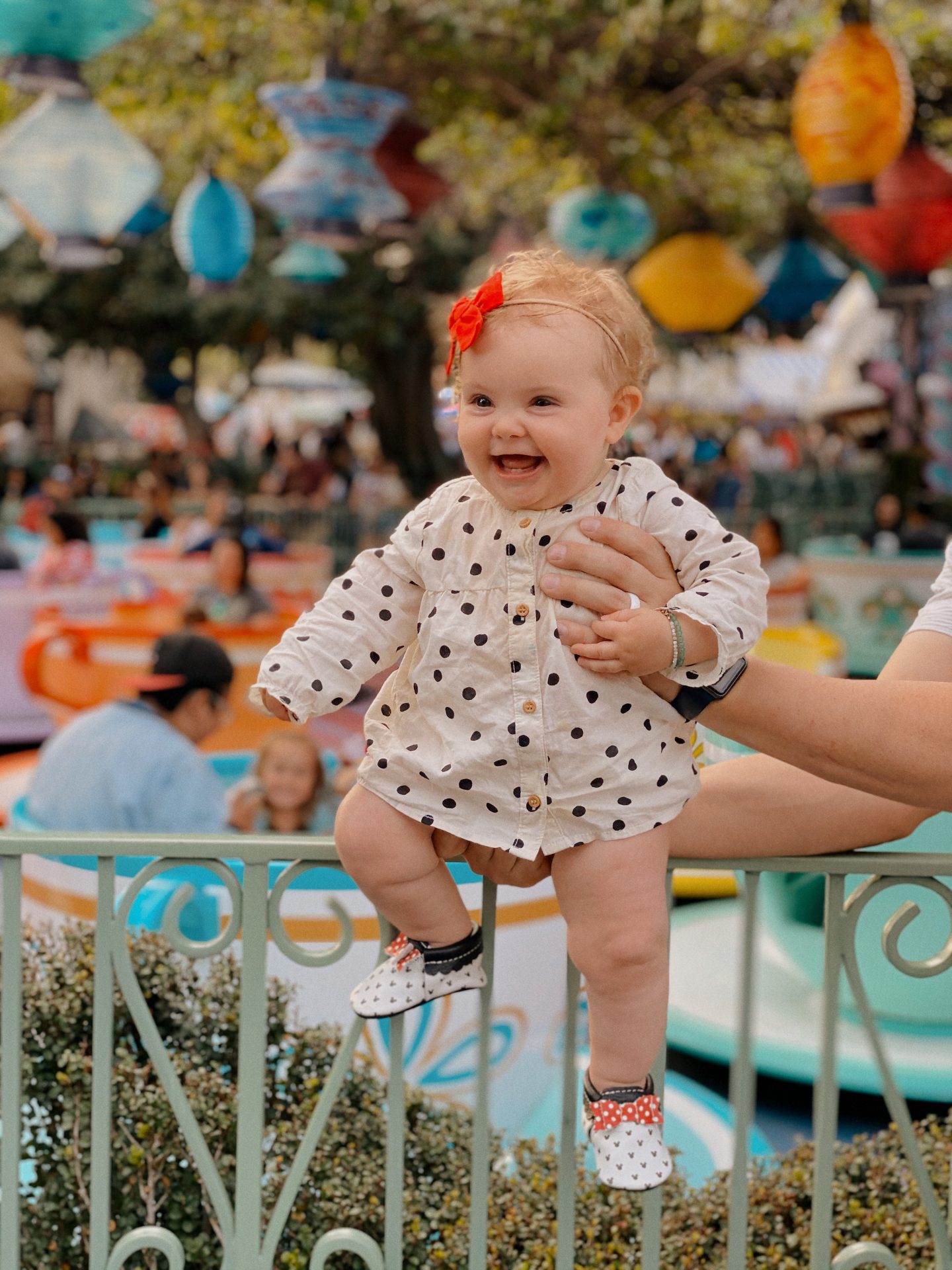 I know that the new Star Wars Galaxy  is all the talk of the town. But that’s because it really is! We were able to get on both the Millennium Falcon Smugglers Run and Star Wars: Rise of the Resistance rides and we were amazed at how fun and cool they really are! I know right now it is such a hassle trying to get to ride the newest Rise of the Resistance ride, but if you can try to get a waiting time, I highly suggest that you do! The entire ride last 30-40 minutes once you first step inside. It isn’t just a ride, it’s an experience.

Again with us living so close to Disneyland, oftentimes we give up and head home around 7 or 8 pm. We rarely watch the water shows or fireworks, but every time that we do decide to stay I am so happy we did! The shows are amazing and the fireworks are just the perfect ending to the day. We stayed and watched the Fantasmic! Water Show, which was a first time for all of us! It was so much fun! We’ve seen and watched the World of Color a few times, which is equally amazing. Both shows worth staying up late to see.

I recently learned just how much is actually happening all day throughout the Disneyland parks. I had somewhat of a small idea, but wasn’t until our recent visit where I was able to take it all in. From shows to parades, of course the rides, and yummy foods. But what I didn’t know was the fun entertainment that is provided throughout both parks. We attended the Disney Junior Dance Party and it was such a huge hit for Edison. He loved it so much and it was a great break for both Brandon and I to finally sit down to watch 🙂 I would do it again! 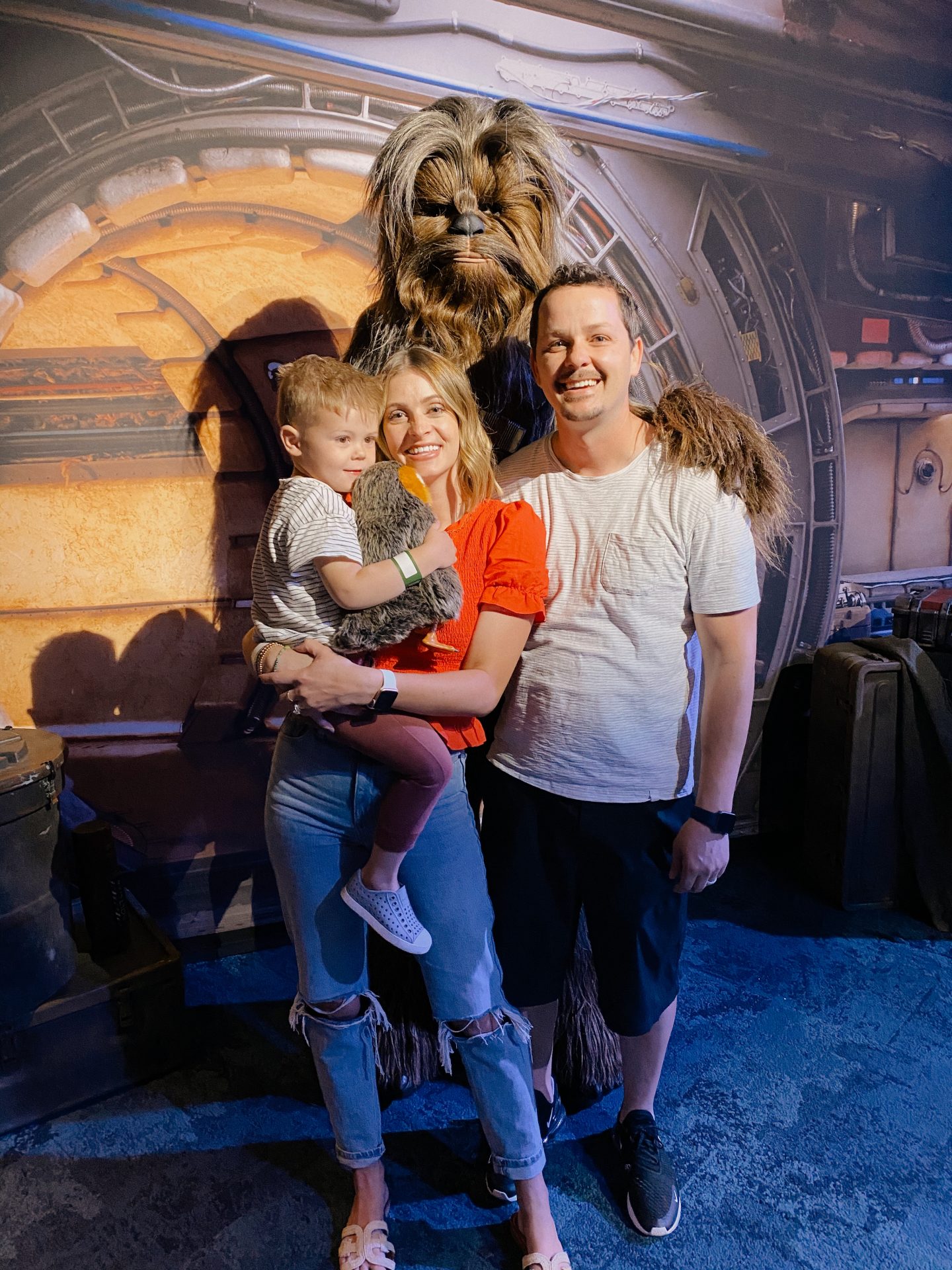 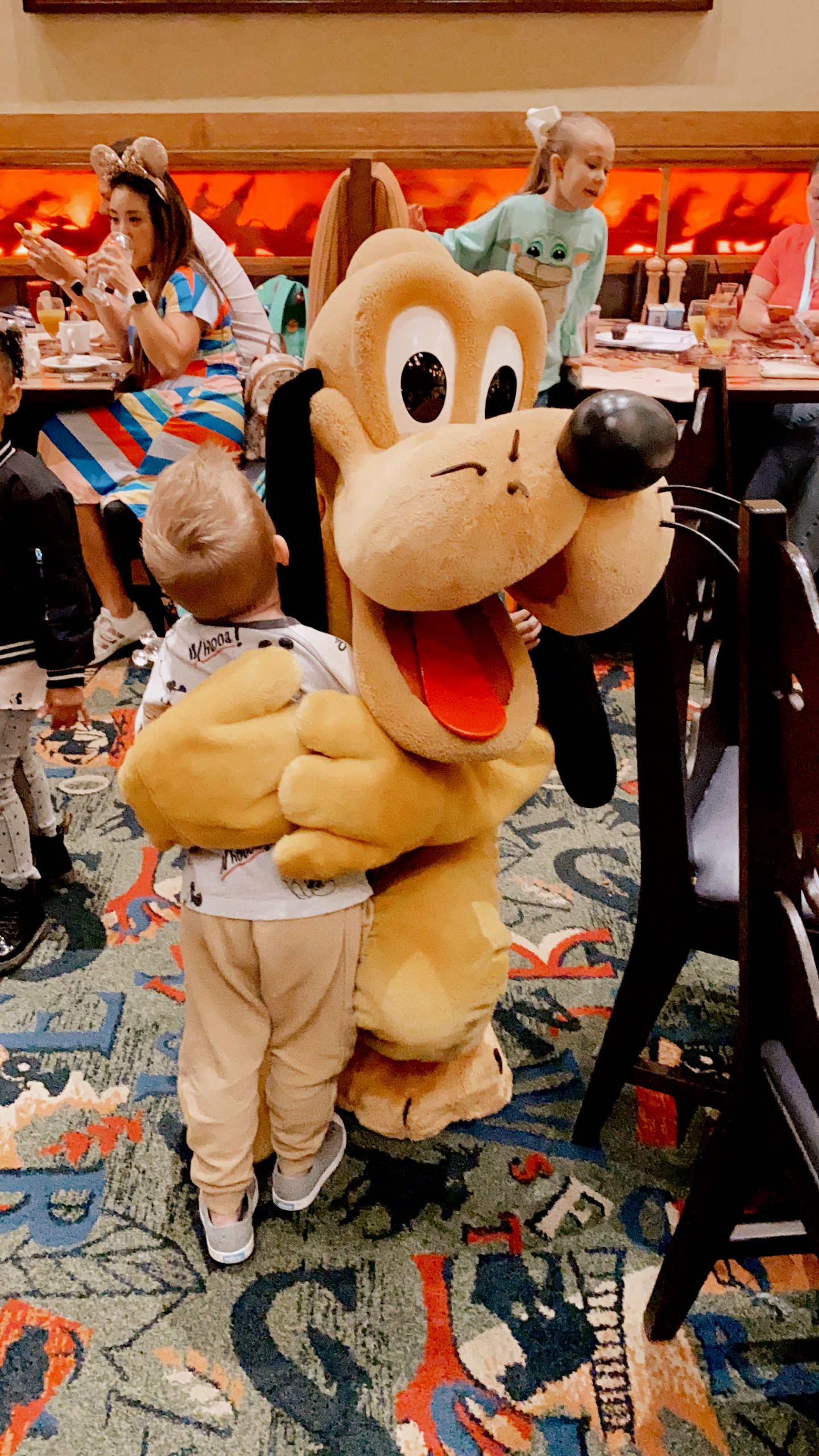 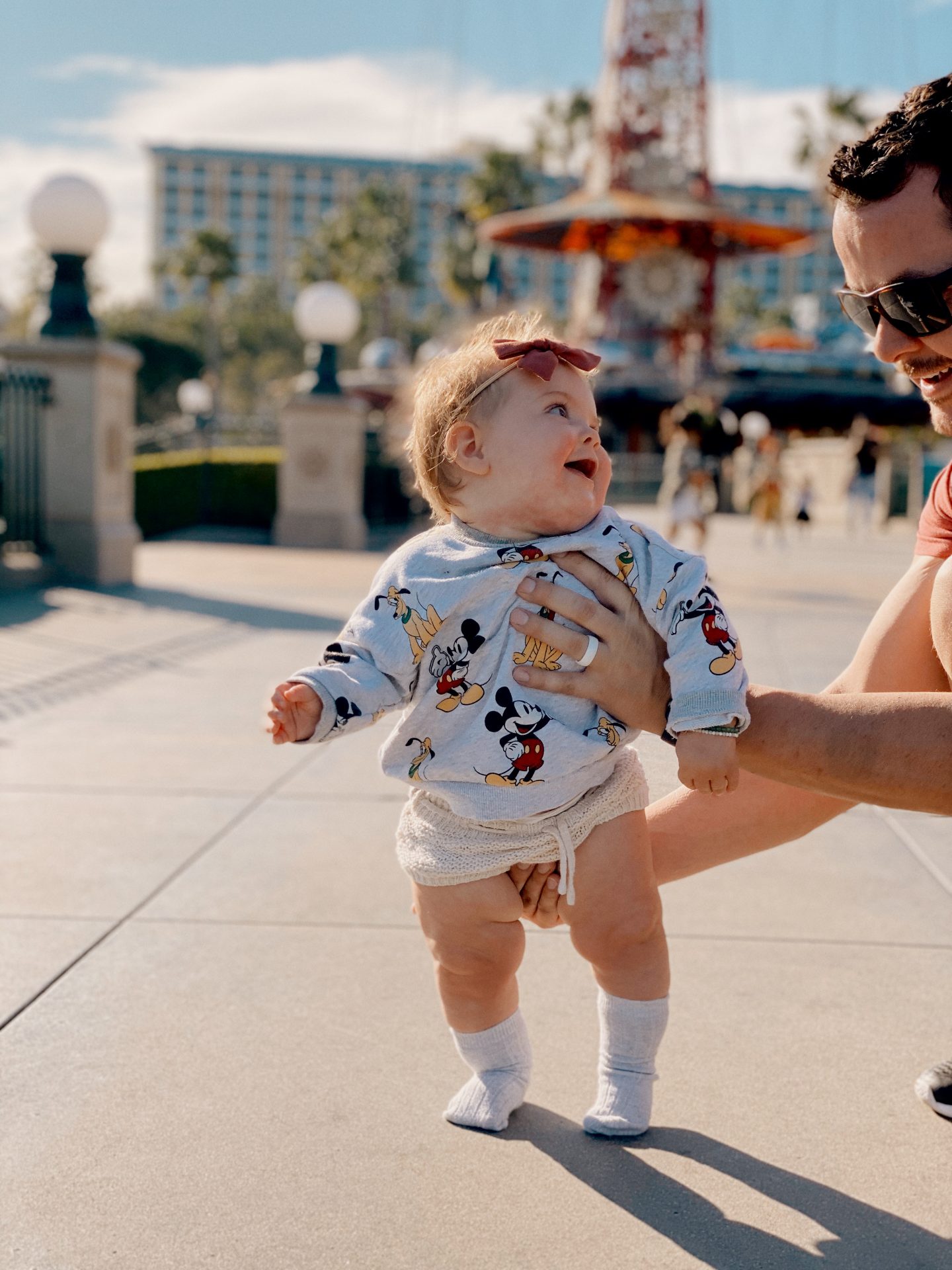 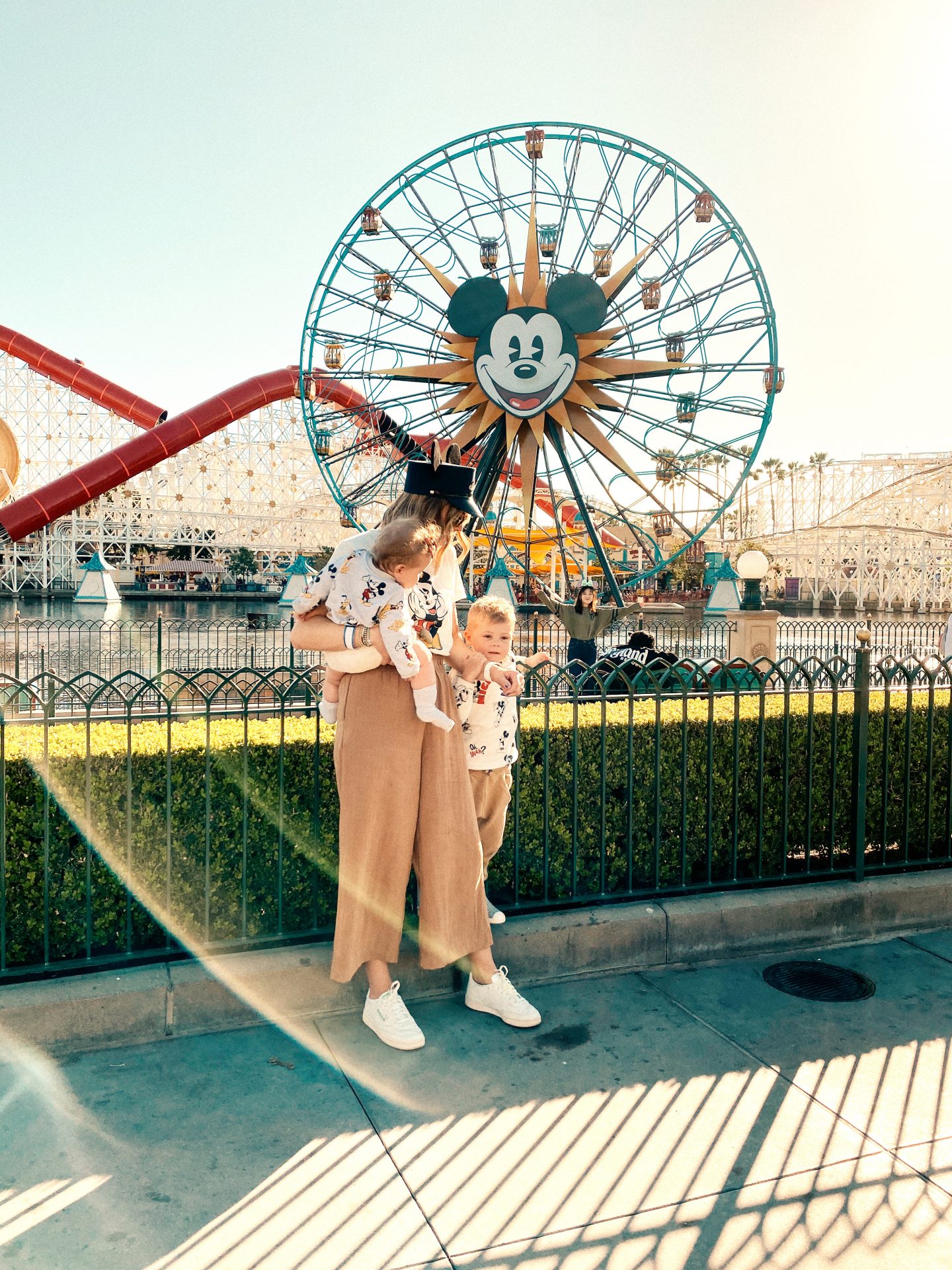 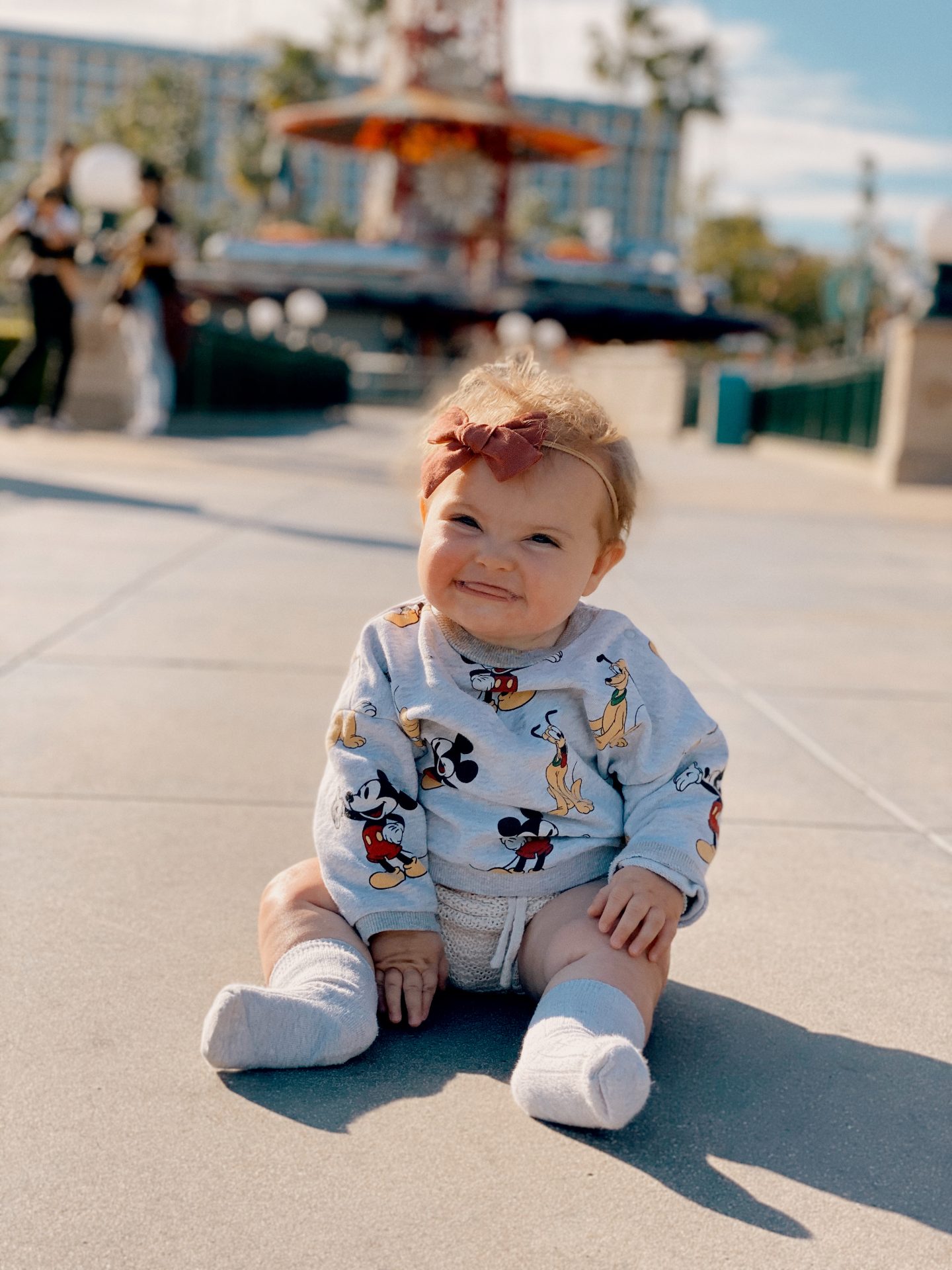 What are your best Disneyland tips?  Let me know in a comment below!